Hello everyone, Crzypengu here with the latest updates. Today I am going to discuss about a product from the Club Penguin Merchandise that is extremely difficult to find or at least as I have found to be and that is this: 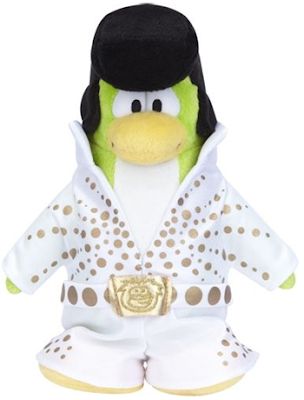 Yes here it is the infamous (at least to me) Rock N Roll Plush. At first sight it looks like a penguin that is dressed up as Elvis but it is actually based on an outfit from the Club Penguin game. 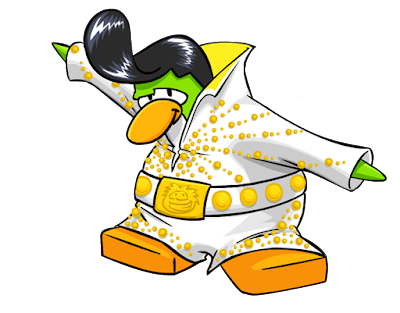 Now this outfit contains two different items that came out in the original Club Penguin Game. The Hair which is named The Rocker was released in October 2007 for the Big Wigs Catalog and the body item which is called The Supernova Suit was released in the Penguin Style back in July 2008. I often question why these two items were not released at the same time but I guess the Club Penguin Team either didn't think about making an Elvis like penguin or there could be some other issue such as licensing. Of course I don't know which particular look of Elvis Presley the Club Penguin Team was trying to go for but it may have been one of his jumpsuits that looked like this. 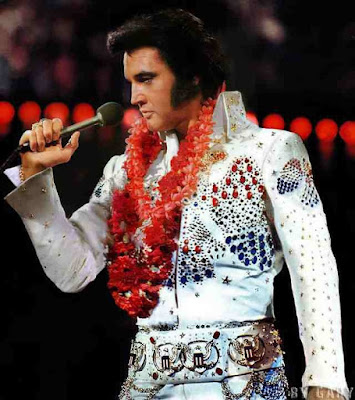 I have to admit I really like that the Club Penguin Team decided to have an outfit in the game represent the King of Rock N Roll. The best thing about this particular design is that the Club Penguin Team had Jakks Pacific make a plush penguin that wore the outfit. The Rock N Roll Plush was first seen on the Club Penguin Series 6 tags which were on the Plush Penguins that could be found in stores. However a Club Penguin fan by the name of AquaBlue500 published a post on their website talking about the particular plush which you can view here. If you don't want to click on the link and rather here the details on this blog post then here it is. Aquablue said that he went to a Target and went to the Plush Toy Section of the store and found there were no Club Penguin Toys there. However he did find the tag with a sticker saying Series 6 on it. When he peeled the sticker off it showed the Rock N Roll Plush as another collectible plush in the series. He went to contact the Club Penguin Team and they said it was a mistake where it would be released in the next series. So instead of waiting I Investigated this and bought the Water Sport Plush to see if the tag did have the Rock N Roll Plush on it. Since this Plush is over 7 years old the Sticker was really stayed on there and I did some damage to the tag, but as you can see this is indeed a real thing. 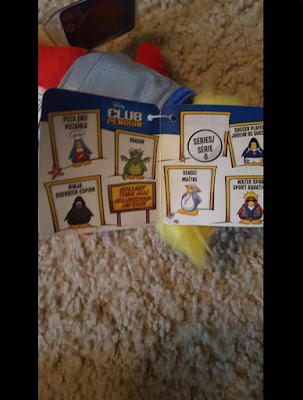 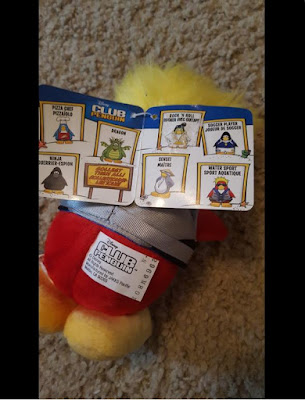 After the Tag showed that the Rock N Roll plush will be a real thing there was a blog post put up by Saraapril which you can view here. In her blog post she found that this particular plush was a Limited Edition Penguin and could be found on the Toys R Us website which seemed pretty awesome. The Plush was the same height as all of them being 6.5 inches tall and had a code that could unlock items online. However the products picture was taken off of the website for unknown reasons which I can't say if it was because they did not have it in stock or if it was just the photo for it. One thing to note about these products is that Lane Merrifield or otherwise known as Billybob said that he orders one of every Club Penguin Product made in an interview by Parents. This interview was done at the Club Penguin Headquarters in Canada and you can view that video right here. Lane Merrifield seemed to be right about wanting to collect as much Club Penguin Merchandise as possible as he posted this tweet on Twitter showing off his collection. 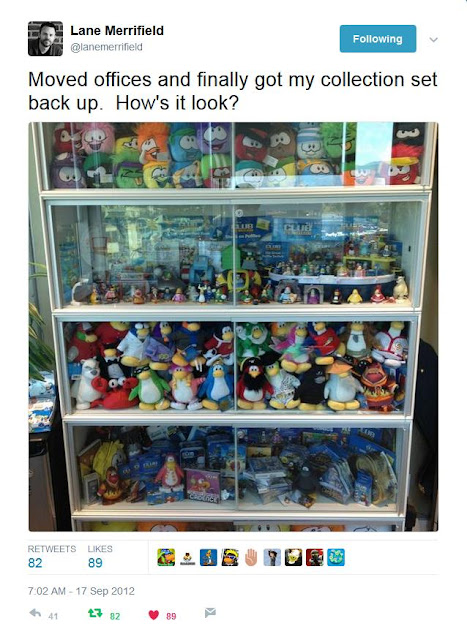 The one thing that really caught my eye when I first saw this tweet was you guessed it, the Rock N Roll Plush. In fact when I saw this tweet back in 2012 I said that it was an awesome collection and that I really liked the Elvis Penguin and the Viking Helmet Penguin which I now own.

Of course the Rock N Roll Plush from Lane's Collection appeared in the background from the New Horizons Part 1 video which was a documentary that talked about how Club Penguin started. You can watch the full video of the documentary right here. 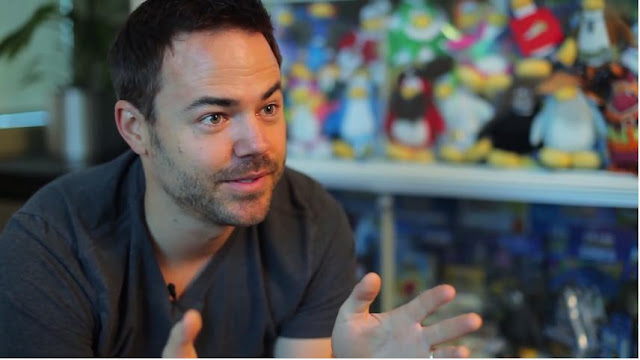 Unfortunately Lane Merrifield has not been put up any tweets since last year, but his account does show that he has liked a couple tweets from this year. So instead of asking Lane Merrifield on how he was able to obtain this Plush Toy I instead asked the Club Penguin Team if they have seen it at all. I have to give a big thanks to Anett for replying back with this:

The Text here may be hard to read so I will also post below on what Anett from the Club Penguin Support said.

"Unfortunately, we don't know of any specific places you can find that particular plush. You are already looking in all the places we would recommend. In regards to us having any at the studio, I'm not sure. We don't have much merchandise left in house at this point as new ones are not being made. I will keep an eye out though!"

I was devastated about hearing this comment from the Club Penguin Support but I can't really blame them as the particular product I am looking for is not easy to come by. If they were able to find one then that would be amazing, but only time will tell. 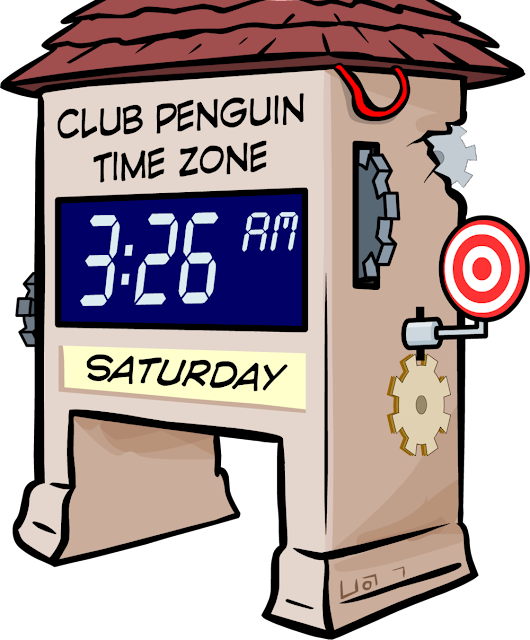 Well that seems like the end of this ridiculous blog post that I wasted about an hour on. I have been looking for this piece of Merchandise on websites such as Ebay, Amazon, and about every single foreign site I could find on the internet over the past couple of years. As of right now I check on Ebay daily and check the foreign websites about once every two weeks. This obsession I have with this Rock N Roll Plush could not be described in any better way than making a whole blog post on it. Most of you will probably never come back to this website because of the Downward Spiral I have been in trying to get a hold of this specific product. Anyways I plan on going up to Canada in exactly 1 Month from now and I plan on bringing the Water Sport Plush to the Club Penguin Headquarters to ask (I mean Interrogate) any employee that has seen or knows the whereabouts of one of the hardest pieces of Club Penguin Merchandise to acquire. Anyways please leave your thoughts in the comments section below or even tell me if you had seen a Rock N Roll Plush in person and until next time this is Crzypengu saying Waddle On.
Posted by Crzypengu at 12:31 AM