What is going on Penguins, Crzypengu here with the latest updates. There has been an issue on the game recently in which bots would be waddling around that aren't controlled by a person and the CP Team decided to talk about it. 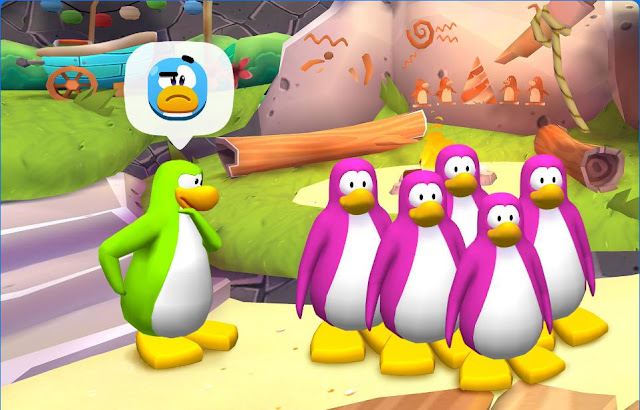 "Let’s take a moment to talk about bots. There aren’t usually many on the island, but you might see them now and then."

"Bots look like penguins but there’s one major difference—there’s no human controlling the account. Instead, they stand in one place and might say pre-made messages over and over. Lame."

"The best way to deal with bots is to ignore them, so you’ll need to know which penguins are real and which aren’t. To help, I’ve created a little something called:"

"Pop quiz, penguins—"
1. "A group of penguins who look the same are standing in one place. They might be repeating the same messages, or telling you to visit a website for things like coins, cheats, or free membership. Bot or Not?"

"Answer: BOT! The most important thing, is to ignore bots promising things that sound too good to be true. There aren’t cheats or free memberships on these websites, and visiting them can actually be harmful to the device you’re on. Stay safe and don’t visit websites recommended by other players."
2. "A penguin is repeatedly saying “Party in my iggy!” Bot or Not?"

"Answer: (Probably) NOT! That’s likely a penguin planning an igloo party. Igloos are in-game so they’re safe to visit."
3. "A well-dressed penguin who loves fashion offers to train you in the art of stealth. Bot or Not?"

"Answer: DOT! That’s no bot, that’s Dot—one of the island’s best designers. And, rumor has it, an elite spy!"
"The lesson here is to ignore bots, especially when they’re telling you to visit a website. Meanwhile, the team is working on others ways to deal with bots. If you’d like to help out, report any bots you see."

"Thank you for keeping the island safe!"

Thanks for providing some information about these Bots on the game Club Penguin. I am sure I've seen a couple bots in the game but not anything huge. My biggest question is who took the picture on this article and if those are real bots or just a bunch of random penguins near each other. What do you all think of these bots going around the island? Is there anything you would like the team try to improve? Please leave your comments down below and until next time this is Crzypengu saying Waddle On!
Posted by Crzypengu at 10:33 PM